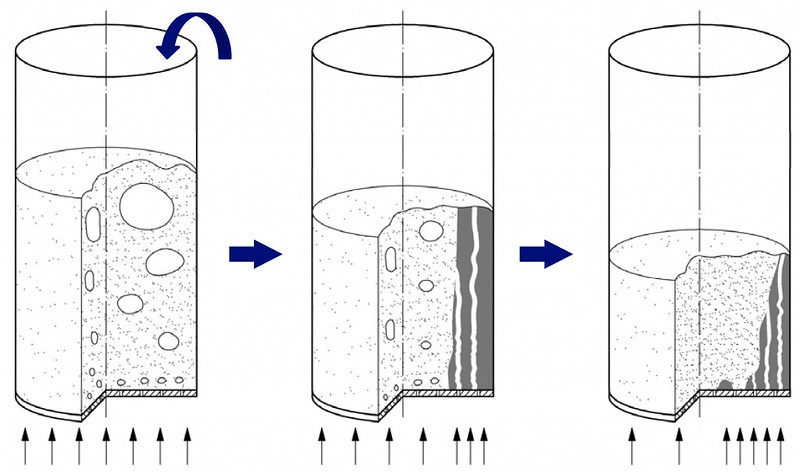 The group measures pressure fluctuation signals in order to detect the onset of the agglomeration process, which is carried out adding liquid to the bed in the cold conditions, or through the fuel agglomeration in the high temperature setup. Pressure measurements are analyzed in time and frequency domains, employing the analysis procedures and the control scheme developed by our group. Two experimental setups are used in order to analyze the agglomeration and defluidization phenomena:

Liquid is added to the bed in order to reproduce the experimental conditions found in literature when agglomerates are formed during fluidization. The rotating distributor is used as a counteracting measurement against the defluidization phenomena. In the video we can see that the swirl effect of the distributor breaks the agglomerates settled on top of the distributor, improving the recuperation of the fluidized conditions. The video also shows the analysis of the pressure fluctuations with the wide band energy.

A lab-scale bubbling fluidized bed with an inner diameter of 52.8 mm has been used to compare two different bed materials, silica sand and sepiolite during Cynara cardunculus L. gasification. The results showed two types of agglomerates: (i) formed on top of the bed, and (ii) formed on the bottom of the bed, which leads to different defluidization processes. Figure 1 shows snapshots obtained during these gasification experiments. Figure 2 presents the influence of the air excess on the agglomerates.